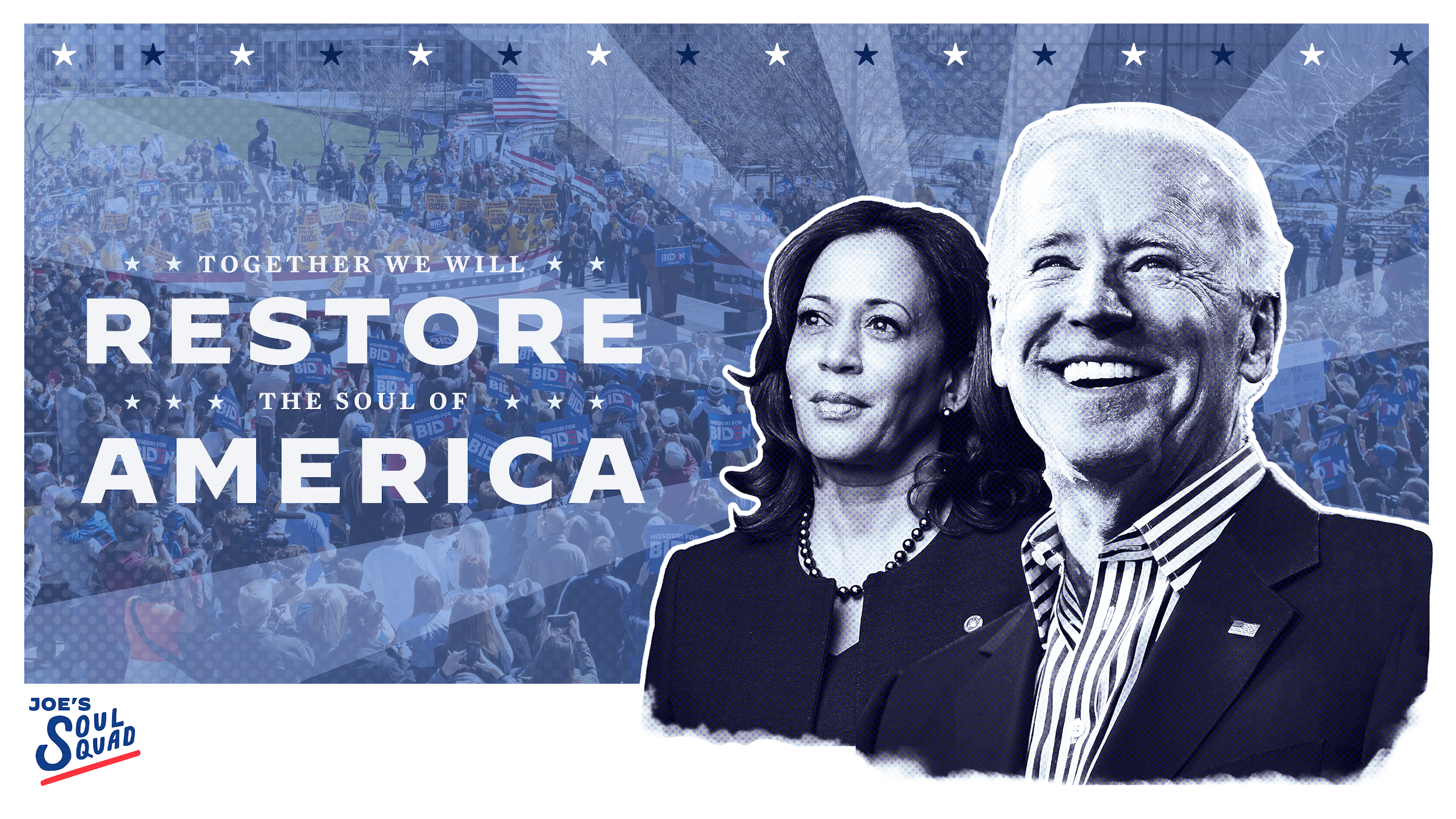 This is their campaign slogan?  I thought it was Build Back Better. Which is it? Biden and Kamala claim they will restore the soul of America. America’s soul and dignity isn’t missing or broken. America’s law and order is. Trump ran on restoring the economy of America and did.  But the soul?  That’s rich coming from these two.

I don’t think I want to be schooled by these two in the Moral High Ground Department.  One who sold influence to his VP position to Ukraine and China in exchange for positions for Hunter and the other who dated a 60 year old man to jump start her legal career.  A career where as a prosecutor would drop cases suddenly and are under scrutiny.  No thanks. America’s soul doesn’t need restoring from the likes of these two.

I judge one’s character by the children one leaves behind on Earth (if one is so lucky to have children) to carry on one’s legacy.  Trump has five children, four of which are very wholesome and successful and one young son and several grand children.  I’d say his character and legacy are in tack as he did a great job raising those children with good values.

Biden has a less than desirable character of a son, Hunter, and one living daughter who Joe set up in a pretty good non profit job much like the Clintons did for Chelsea.  Kamala has no children to pass on her legacy.

Today’s charade was the phoniest speech from these two that I’ve ever heard, the false praise was over the top.  Biden bringing up the anniversary of Charlottesville was not only despicable but inappropriate for the event of introducing his running mate.  Trump never said White Supremacists were fine people.  He said people on both sides of the “issue of tearing down statues” were good people. Joe can’t tell that Trump was trying to diffuse a potential volatile situation.  That’s what presidents do.  They don’t fan the flames of unrest like Obama used to do, they put them out.  Joe has been perpetuating this lie for three years.  If this is Biden’s biggest issue with Trump, he needs to go back to the well.

And Kamala saying that Trump failed at the covid crisis and didn’t care was also despicable after all the press conferences they’ve held and all the equipment they got companies to build in an expeditious manner for the states. So ungrateful.  Her saying he recommended a drug he heard about on FOX News was literally stupid as well as saying he flip flopped on mask wearing.  Trump always said a face covering would be advisable; it was Fauci who flip flopped.  This drug has been around for 50 years and was effective on patients until politicized governors refused to allow it to be prescribed.  Democrats have blood on their hands, not Trump.

She also had the gall to complain about schools being closed.  Are you kidding me?  Trump wants them open and wants them open yesterday, but the Democrat governors are dragging their feet.  Democrats have blood on their hands.

Let’s face it, the only reason the Democrats picked Kamala is to be an attack dog on Trump. Full stop.  This is all she’s good for as evidenced by the fawning, gushing praise the media is giving her. Today they labeled her a “pragmatic moderate.”  Really?  That’s what they used to call radical Obama. I can see where this is going.  Where were these sycophants when she ran for president? Kamala bullied Biden during the debates and then he chooses her?  If he caves to a woman, what will he do with foreign heads of states? We already know.  And Rashida is bragging that Biden is very malleable.  No kidding! It’s a sign of weakness.

Kamala told some whoppers during her speech.  Trump didn’t inherit eight years of increasingly good economy from Obama Administration.  This is another lie perpetuated by the Democrats which has not one iota of truth to it. Kamala lies too much for me and has no business talking about restoring the soul of America.  She’s a phony and flip flops on issues more than John Kerry.  She has no principles or convictions to stand on i.e no values.  The Democrats are probably planning to throw her in at the top of ticket before the ballots are printed. They are up to no good.

Kamala admitted today that her parents were radicals from Jamaica and India that used to bring her to marches and demonstrations as a baby.  I guess that was pandering to the BLM vote. No wonder she turned out like she is.  I can’t imagine my parents ever bringing us to a protest or march. They were too busy working for a living or trying to put food on the table.  But since she got her calling (values) from her parents, it’s no surprise the way she is.  Apples don’t fall far from their trees.

Build Back Better is a stretch for two life long bureaucrats that have never signed a payroll check, ran a company, or built anything.  How will they build back better or restore the soul of anything when they don’t know how things are run? Just wondering.

Biden often says his father or ‘grand pappy’ told him “Joey, a job is more than a paycheck.” That’s great advice.  Why didn’t he learn something from it and encourage the Democrats to open up their states and let people get back to the jobs they had prior to covid shutdown so they can get their self esteem back and possibly get some of these unemployed rioters off our city streets? Just wondering.

Kamala is not historical nor is she a moderate.  We shouldn’t be picking VPs by the color of their skin or gender, just their qualifications which hers are in question.  It’s racist to point out one’s race. It’s also racist to choose someone based on their skin color to pander for votes.

And no, Joe, Trump is not threatened by a strong woman.  Remember he ran against the strongest woman, Hillary, and ate her lunch.  Tulsi Gabbard took Kamala out in one debate, I think Pence can hold his own.  Or are you hinting that Trump will be debating against Kamala?  Nary a mention of Pence during their announcement speech.  Hmmm. The Democrats are up to no good.