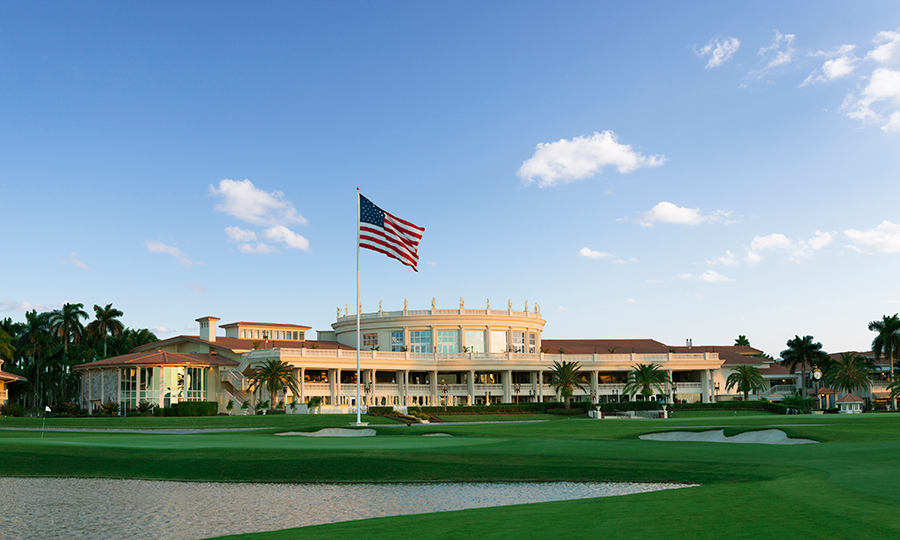 Trump is always looking to save the government money.  If his resort will be cheaper, more beautiful, and more comfortable than other choices they had for the G7, why wouldn’t he recommend it?  It would be analogous to parents offering their estate home for their child’s wedding-saves money on the venue.  Will it look bad in the eyes of his critics?  For sure.  Is he spitting into the wind?  No doubt.  Does he care?  Not a bit.  Will he change the venue? Not likely. (Oops, I think he just did. My bad. He did once say he likes to be flexible. Updated 10-20)

Trump said they would do it at cost so his resort makes no money.  No emolument clause issues. But, as usual, the Democrats and Chris Wallace got their panties in a wad and said there’s a motive for him to gain a profit.  Let’s get one thing straight, Dems, if Trump wanted to make money he would’ve stayed in the private sector building high rises all over the world.  He’s not even taking a salary as president.  And his sons have given up all overseas work, unlike Hunter Biden. And Chris, if the resort needs any upgrades (as you’ve snidely implied) to hold the people, Trump would pay for them out of pocket as he’s a builder, you biased reporter. He’s not a shyster like you are implying.  So what if bookings are normally down in June in Miami?  It will keep the employees working rather than going on unemployment.  Since when is keeping minimum wage employees working a bad thing?  Double standard.  The only thing Wallace should be complaining about is the heat at that time of year.

Bush famously held many meetings at his ranch in Crawford, Texas. So it’s not a first.

The place dubbed Bush’s “Western White House” has seen 18 visits by foreign leaders, scores of news conferences and long bike rides in the 100-degree heat, as well as the commander in chief’s seemingly ceaseless quest to clear brush. With the approaching hand-over of power to President-elect Barack Obama on Jan. 20, such moments are coming to a quiet end. Spokesman Review.

I think what the Democrats and media (which are one and the same) are really worried about is that the folks who attend the summit will find that Trump’s Doral Resort is really lovely, and it will be reported by some honest reporter–maybe even overseas–and they can’t have that.  They don’t want other countries to think anything positive about Trump. That’s what’s really going here–another attempt at burying the truth. So media and Democrats, shut the Bleep up! Trump won, and elections have consequences.  Get over it! This won’t be another reason to impeach! I’m sure if Obama offered up his 29 acre cliffside resort in Cape Cod the media would be swooning over his generosity.

Trump’s rally in Dallas last night was exciting and energizing. It almost felt like one was in the stadium with the audience.  They were so fired up–20,000 inside and 30,000 outside. How can any candidate compete with that?  Trump has a rock star like following. And the more the left talks about impeachment, the larger his crowds get. Trump went after Nancy for staging a fake news “meltdown” after a meeting. Why does she act like a mean girl in high school?  Trump hands her a letter, she flips it face down on the table, refuses to read it, then smiles at him.  It’s strange the way she’s behaving lately. Maybe she’s regressing into childhood. But the fake media reports that she’s got control over the president. I think she’s had insomnia since the impeachment inquiry began as she knows in her heart of hearts that there’s no grounds for it. She’s feeling conflicted and guilty.

If a women in power had ever behaved like this to Obama (and one did) she would be vilified in the news for being a Nurse Ratched. Governor of Arizona, Jan Brewer, wagged her finger at Obama and it was as if she had pointed a gun at him. The media always takes the side of the Democrats, and I think the public is starting to catch on.  If not, they must be blind. One liberal recently wrote that the losing party was willing to give Trump a chance after he won.  That is not only false but is laughable.  He was never given a chance as they organized the Women’s March the day after the inauguration and made horrible threats on his life. And haven’t stopped since. If that’s giving him a chance, I must be blind too.

Then Trump poked fun at Beto for saying he’s going to take guns from everyone and not allow churches to have tax exempt status.  It’s a losing “hail Mary” if anything especially in Texas.  He said Schiff committed fraud when he composed a false script of Trump’s phone call.  Whether he committed fraud or not, nothing will happen as the Democrats are always above the law.  He also had a go at Hollywood and called them stupid. He barely mentioned Sleepy Joe or Pocahontas, just that we’ll win in 2020, if that’s all they got. Then he read a list of what the Democrats will do to the country if they win: from taking democracy away to bankrupting us to open borders to free college to healthcare to illegals to raising everyone’s taxes, and raising the deficit by 30 trillion.  That’s no lie if a socialist wins.

Trump also kidded around with his former rival Ted Cruz in the audience.  He mentioned that he had to go up against Ted who was top debater from his college and was nervous.  He hired a debate coach and fired him after one session. Sort of gave us a behind-the-scenes look at how Trump won the presidency.  Not by colluding with Russia but rather by campaigning everywhere, working hard, and practicing for his debates.  It gave a softer side to the usual boastful, tough guy Trump.

Yesterday while traveling through my local biggest city, the street was lined with Trump supporters in front of City Hall shouting his name and carrying banners and flags.  It gave me hope that maybe my state is turning back to Republican.  One could only hope. Although I witnessed a few sour faces driving past them.