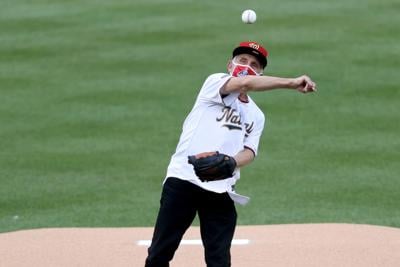 The darling of the left, threw way to the left. He threw the opening pitch at the opening season game, but it went about fifteen feet to the left of home plate. It was, frankly, embarrassing.  If I was a guy, I’d say he threw like a girl.  But I don’t think any girl would throw that bad.  Seriously.  It was horrible.  He may need new glasses or take off that unnessary mask while throwing. You’re outside, Fauci, and no one’s around you.

I think he oversold the fact that he used to play baseball.  I think he oversells a lot of other things like his expertise on viruses.  The mask will help, the mask won’t help. Reopen schools, don’t reopen.  Reopen businesses, don’t reopen. Ironic that the ball went left?  Not really.  It was a sign. We always knew he was on the left.  Now God proved it to us.

I guess when Fauci claimed a few days prior that he would throw a curve ball, he didn’t know the definition of a curve ball because it’s supposed to end up crossing the plate with a strike–not literally curve fifteen feet off course. Fauci strikes out.

The cancel culture wants to change the name of Squaw Valley because it is disrespectful to Native American women.  Give me a break.  This is getting out of control. What’s next, Heavenly Valley’s name is too religious?  If we continue to cave to pressure from these snowflakes and change the names of ski resorts, military bases, cities, and vacation spots, we deserve what we get.  We gave them an inch.  Yosemite fought to keep the historical Indian name of the Ahwahnee Hotel.  We have to fight to keep our history from being totally erased by these sensitive, brainwashed snowflakes coming out of college. But it seems the local government and even the military just rolls over to their lame demands.

The Donner Party was a horrific memory yet lakes, ski resorts, and towns are named after them.  Are we going to erase that little tidbit from history too? Why we are taking down Christopher Columbus statues, I do not know.  He was one of our most admired explorers that we used to celebrate.  But everything is upside down in this bizarro world.

Last night I dared to rent the movie Contagion.  I was shocked to see how what we are going through today is identical to this movie from the masks, social distancing, surface contact, washing hands, no handshaking, bat virus from China, looting of stores, destruction of cities from crazies in the streets, contact tracing, world epidemic, search for the vaccine, mass evacuations, shutdowns, and mass graves.  If I didn’t know any better, I’d say the writer of this story knew this was coming or China got the idea from this movie.  Life imitating art, much? Who produced this movie, Netflix?  Hmmm.  Who’s that owned by?  Just wondering. :^/

It is almost as though China used this movie as their blueprint to cause world panic, death, and economic ruin.  The only difference is we stopped incoming flights early on that prevented millions from dying like in the movie and required “essential workers” to keep grocery stores, gas stations, garbage collection, and hospitals running.  They didn’t plan on that, did they? Thank you, Trump.

But the other main difference in the movie is they didn’t have to deal with BLM, Antifa, and the other lowlifes that are rioting in our streets due to an election year, nothing to do with the bat virus. Almost seems like BLM and Antifa are the Democrats’ “Plan B” if the virus didn’t ruin Trump.  These know-nothing anarchists are getting paid to oust Trump and are in cahoots with the Democrat governors in liberal states.

One Democrat governor accidentally call himself President Cuomo recently.  I suggest that he’s planning on being Biden’s VP pick and made a Freudian slip; if Michelle isn’t available, of course.  He’s not quite dark enough although he has been sporting a tan and not female enough, but Biden won’t know the difference.  After all, he mistakes his sister for his wife and recalls nurses blowing him.