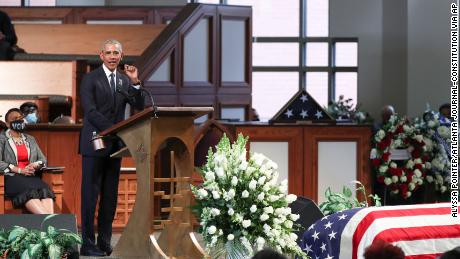 resulting in cheers and standing ovation from the attendees of John Lewis’ funeral.  The last time I attended a funeral it was taboo to even clap during the service.  This looked more like a political rally as if Obama himself was running for president again. I wonder why Biden didn’t attend or speak?  Just kidding.

He began his eulogy sounding like a preacher then went political saying some in power are trying their darnedest to prevent folks from voting. This is blatantly wrong. Obama does not respect the dignity of the presidency and how one acts after leaving office.  He’s supposed to fade into the sunset.  But not Obama! He’s not finished with the divisiveness he started in America.

He talked of voter suppression at a funeral no less. He claims asking for voter ID is voter suppression. Yet I recall it was Obama that placed Black Panthers at some polling locations to intimidate voters from entering the building. Eric Holder, his wingman, chose not to investigate. Remember, whatever “they” are doing or are planning on doing they accuse Republicans or Trump of.  He talked of polling locations being closed down in minority areas.  This is crazy talk. If anything we’ll add more polling locations due to the virus to shorten the wait time.

Everyone knows that mail-in ballots are rife with fraud.  I have received three Federal Census Ballots when I should have only gotten one.  So with this in mind, I can only imagine how many “extra ballots” folks will receive especially if they have more than one address. There’s just no accurate way to collect ballots by mail and depend on every post office to do the same.  How do the homeless get ballots unless by volunteers distributing and helping to fill them out?

If we can go to the grocery store, a protest, or a funeral, we can certainly vote leaving six feet in front of us and wearing a mask.  We’re not a country of idiots like they want to treat us. We won’t get “sick” if we stand in a line for ten minutes.  Quit lying to everyone, Obama!  If anything is suppressing the vote, mail-in ballots will be, as ten percent will be filled out incorrectly and thrown out.  Obama is lying like when he lied to us about keeping our healthcare plan, our doctor, and lowering our premiums.  Obamacare caused thousands of doctors to quit or retire early.  He lied.

The hypocrisy of the left never fails to disappoint.  I like the voting booth and the voting booth ONLY.  A mail-in ballot touches too many hands and machines before it reaches the official hands. No telling how many “deceased”, illegals, pets, or felons will be voting fraudulently by mail. I know there’s jail time for voter fraud, but surprisingly we never hear of anyone getting prosecuted for it.  The government doesn’t have the time to tract these lawless people down. Plus mail-ins would begin at the end of September not allowing for the inevitable “October surprise”.

Obama, you should be ashamed of turning a funeral into a race-baiting campaign rally.  Shame, shame, shame.  You disgraced the memory of one of your icons (that didn’t attend Trump’s inauguration.)  But the same politicizing was done at the McCain funeral and has become SOP for the Democrats. Everything is politics to them.

The Democrats definitely don’t live by the Golden Rule. For instance, the Republicans wouldn’t turn a hypothetical  Republican senator’s funeral into a Biden bashing event.  They just wouldn’t. They have more class. Democrats live by their own self-aggrandizing rules. After witnessing Obama’s disgraceful performance today akin to a campaign rally, we need to vote them all out!